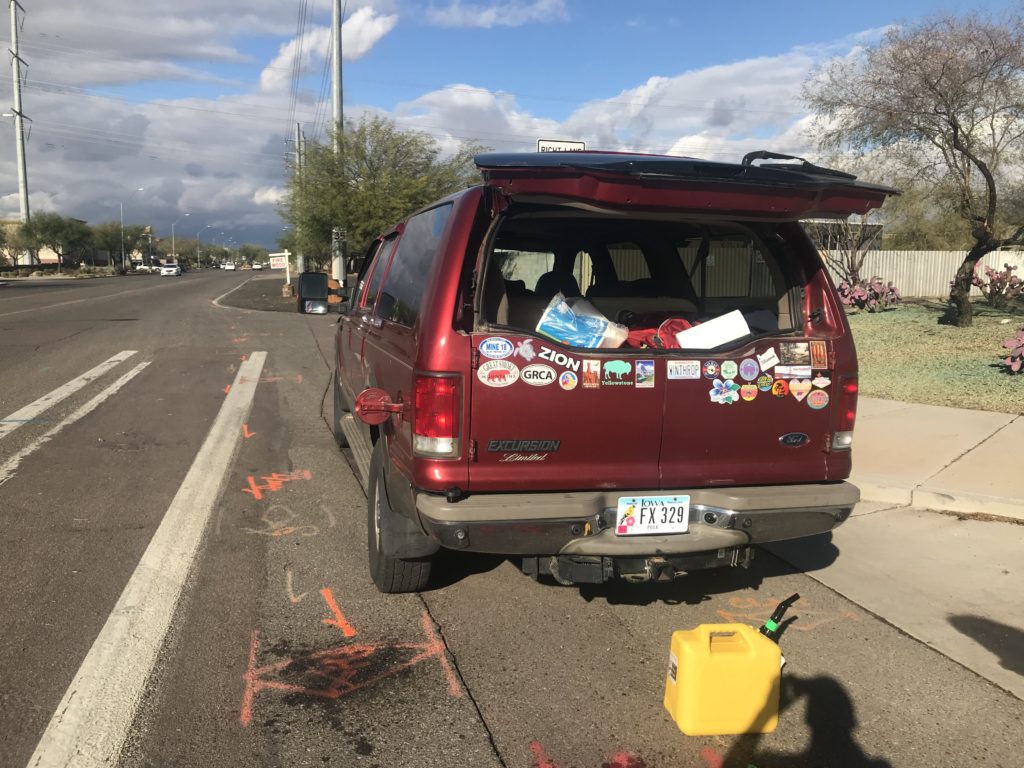 I noticed recently that our hitch was coming unbolted from our frame. There are supposed to be 8 bolts holding the hitch in place, and we were down to 5. This is a problem. I found a shop near where we are staying where we could get it fixed. They replaced all 8 bolts and the hitch is stronger than ever. The funny thing is that they had to grind off the other bolts. It seems that with our truck things are either falling apart or stuck together.

In order to replace the hitch there was a chance they would need to drop the fuel tank. I allowed the fuel level to get way lower than I normally would. I guess it got too low because after leaving the shop and heading to the gas station I sputtered out. I actually had to walk to Lowe’s, then the gas station, back to the car, then another trip to the gas station to get the fuel level high enough. Eventually she started and I was able to make my way home. I did reward myself with a stop at Carl’s Jr for a Western Burger.

I feel like I am becoming more at ease with some of the stresses that this trip throws our way. Things are going to go wrong with the car, with the RV, and with our plans. We have been dealing with it for 6 months and we have 6 more to go.  We are going to do this thing. Just like with parenting, sometimes we need to adjust our expectations.

At the end of the day yesterday I was able to go for a walk with the kids down to the lake. The sun found its way out of the clouds for a beautiful sunset. The mountains opposite the sun had a beautiful purple color to them and Elliot made the connection with America the Beautiful, “Purple Mountain Majesty.”

It has been a long 24 hours. I haven’t posted much about our car troubles, but we have had more work than we were planning on. In the past 2 months we have had to fix 2 fuel leaks. Yesterday when we drove in to Vegas I thought we had another. This caused some stress as we are tired of spending money on the car. We talked about it before bed and came up with an action plan for today.

Then the winds came. There were crazy wind gusts last night that were shaking our whole RV and making a lot of noise. Neither Susan nor I slept very well, and I had to get up early for work. I was tired.

I ended up taking the car in to the shop this morning and they located the leak and it turned out to be the transmission gasket. They were able to fix that, change my oil, and replace some worn out parts in the front suspension faster and cheaper than the appointment I have scheduled in San Diego next week, which I can now cancel. Also, they had blazing fast internet, which is awesome.

I pretty much spent the work day there, came home, and then took the kids to the park. There is a park here in Boulder city where bighorn sheep like to hang out. Today there were 50, just grazing on the lawn. It was a cool site and a nice way to wind down after some stressful times.

Lest we forget, today we drove in to San Francisco in our Excursion. We had to go up a crazy-steep hill, with a stop light at the very top. The crazy thing is that the front of the Excursion is so big that we could barely even see over the top of the hill until we crested it. Good times.

We are having some work done on our car at Kenner’s Service Center. They have been super nice and the ‘lobby’ of their repair shop is incredible. I felt like I was in Harry Potter, walking into a car repair lobby and all of a sudden being in someone’s house.

It has been a rough week for the beast. We got settled in to our campsite on Monday evening and while we were out running errands it began acting funny. Tuesday was the 4th of July and I spent Wednesday looking for the best option to take it. On Thursday I ordered a part to try to fix it, but no luck. In the evening we had to towed to Jerry’s in Harrison and by this morning they had located the issue and hope to have it fixed by this afternoon.

We are going to spend one more night at Winton Woods, where a couple has graciously agreed to let us have their site, since the campground is full.

Update: Still not fixed. 🙁 They fixed the main issue, but found an oil leak during the test drive that they want to fix. They hope to fix it in the morning, and I hope so, too.